Is it better to donate highly appreciated securities or to make direct IRA contributions?

While it is not true that making charitable contributions doesn’t cost the donor anything because they can just “write it off”, there are tax advantages available for making charitable contributions.  My favorite tax opportunity is donating long-term securities (held at least one year) that have appreciated.  By donating these directly rather than selling the investments (generally stocks, but other investments could qualify), the donor gets a tax deduction for the full fair market value as of the date of the donation, and is never taxed on the unrealized gain.  This is a double benefit intentionally placed into the tax code to encourage both long-term investing and charitable contributions, both of which are good for society.  Let me illustrate how this works.  Let’s say you bought 100 shares of ABC in 2009 for $15/share, and held them until today.   You’ve realized great appreciation, as the shares are now worth $60 each.  You want to make a donation, so you donate the shares to your favorite charity.   You get a tax deduction for the $6,000 of value that you donated, and you avoid taxes on the $4,500 of gain you would have realized if you sold the shares.  Assuming you are able to itemize your deductions and that you are in the 24% Federal Income Tax bracket, you would save $1,440 with the deduction, and avoid capital gains tax of $846 by not selling the shares.  Depending on your state, you may save money on state income tax as well.

A second great opportunity for charitable giving is the Qualified Charitable Distribution (QCD).  Taxpayers who are at least 70.5 years old can make a donation directly from their IRA account to a qualified charity through a QCD.  The gift is not deductible, because it gets even better treatment – it is not included in Adjusted Gross Income (AGI).  There are several tax thresholds tied to AGI, and none of them are good for the taxpayer.  These include taxability of Social Security, Medicare surcharges, net investment tax, and deduction phase outs.  Further, with the increased standard deductions from the Tax Cuts and Jobs Act, most people no longer use itemized deductions.  If a taxpayer is not above the threshold, there is no benefit for having an itemized deduction.  State and local taxes are capped at $10,000/per year, and retirees often have modest mortgages or no mortgages at all.  This means that for many retired couples who are charitably inclined, they get no benefit on their first $18,000 of charitable giving.  This makes the QCD a great option.  QCDs also count toward the IRA owner’s Required Minimum Distribution.

Which is the better technique – donating appreciated securities or using QCDs?  It depends.   Until a taxpayer is 70.5 years old, a QCD is not allowed.  RMDs don’t start until age 72.  Taxpayers who are old enough for QCD’s and don’t itemize generally will be better using the QCD, especially if their capital gains rate is much lower than their income tax rate.  Taxpayers who already itemize and have very large gains in taxable positions are probably better off donating the shares, particularly if they want to sell them anyway.   There are also limits to consider.   Donated appreciated property can only be deducted up to 30% of AGI (20% if donated to a Private Foundation), while QCDs are limited to $100,000 per person per year, and cannot be given to Donor Advised Funds or in fulfillment of a legally binding pledge.  Finally, estate planning issues should be considered.   Taxpayers who hold shares they plan to leave to their heirs can just wait for the step-up in basis (wiping out any unrealized gains) in their estate.  Appreciated property is the best thing to leave in an estate, while a traditional retirement account is the worst – it gets taxed at the heirs’ ordinary income tax rate, and they generally have ten years or less to withdraw the entire amount.

Consider a couple of illustrations.  In the first case, a married couple files jointly.  Adjusted Gross Income before RMDs or capital gains is $180,000.  The RMD is $60,000, and the couple doesn’t need the funds, so they want to donate the value to charity.  They also have shares of ABC stock worth $60,000 which they purchased years ago for $15,000.  They would like to liquidate these shares to diversify their portfolio and realize their gains.  They have three options: 1) sell the shares, take their RMD and write a check to charity for $60,000, 2) donate the shares directly to charity and take the RMD, 3) sell the shares and fulfill their RMD through donating $60,000 from the IRA as a QCD.   I assumed other itemized deductions were $30,000. 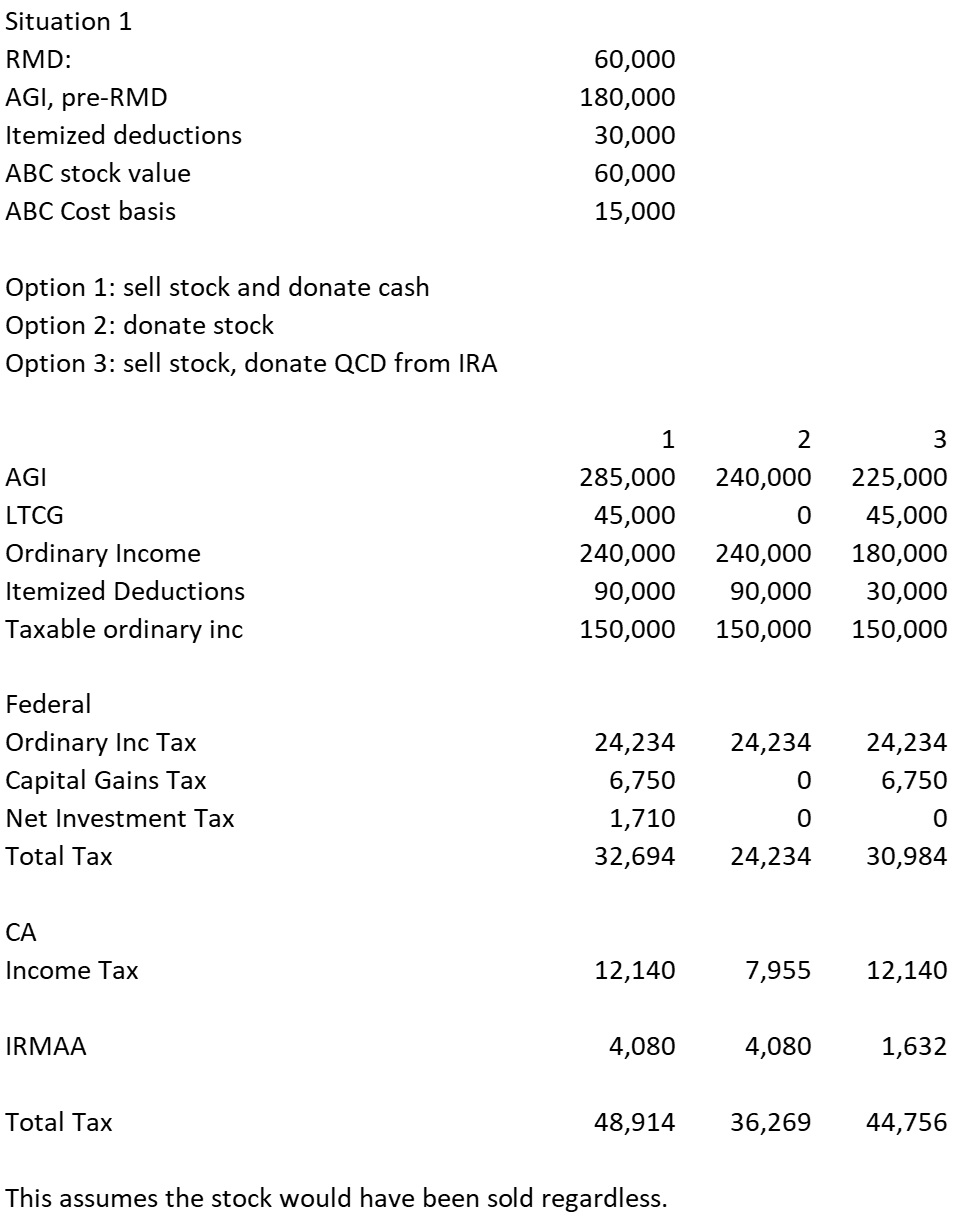 IRMAA is the Medicare premium from having income too high.  While not technically a tax, it is practically a tax, so I include it.  The net investment tax is a 3.8% surtax on investment income for taxpayers over an AGI threshold.  In this situation, the taxpayer already itemized deductions before this large gift, and was going to sell the stock anyway.  I assume the taxpayer lives in California, which taxes capital gains at ordinary income tax rates.  There is a savings in Medicare premium by using the QCD vs. paying cash from outside the retirement account.  Much more significant is the savings from donating the shares directly.  In this example, the Medicare IRMAA bracket was such that there was no savings for the AGI reduction from the stock donation, but there very well could be in many situations.  The double benefit of avoiding the capital gain and deducting the gift was much greater than the IRMAA benefit of the QCD.

In the second illustration, I reduced the amount of RMD and the value of the stock to $6,000 each, and the other itemized deductions to $10,000.  In this case, the taxpayer would be eligible for the standard deduction, so the available deduction from the gift would not be valuable.  This tips the scale in favor of the QCD. 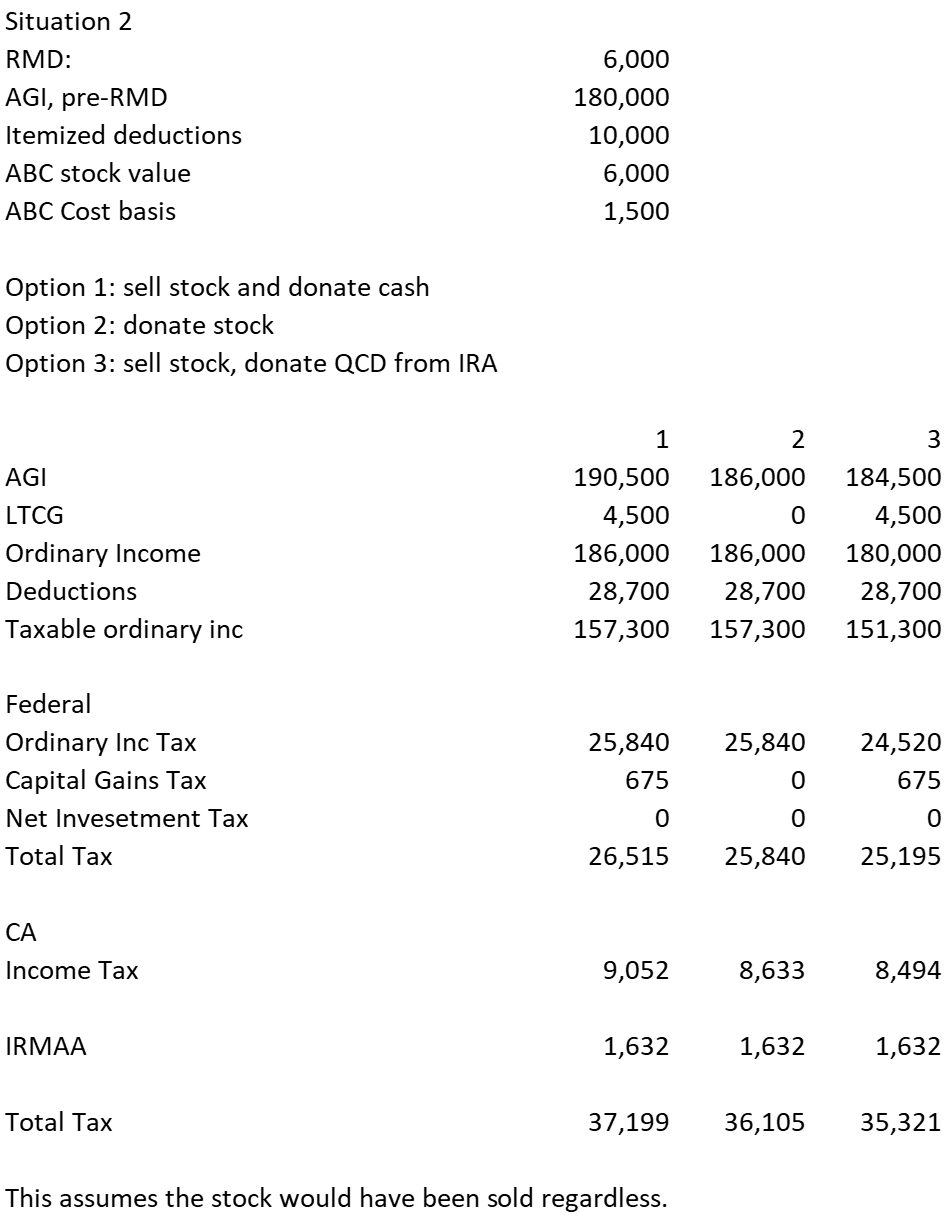 While both QCDs and donating appreciated assets are helpful, there are numerous considerations in determining which technique to use.  If you need help solving for which is a better tool for you, your financial planner or tax strategist should be able to do a side-by-side comparison for your specific situation.

The views expressed are the views of Jacob Rothman on behalf of Rothman Investment Management, LLC through the period ending January 4, 2023, and are subject to change at any time based on market and other conditions. No client or prospective client should assume that any such discussion serves as a substitute for personalized advice from Rothman Investment Management, LLC.

The information herein should not be considered a recommendation to purchase or sell any particular security. The securities and strategies discussed herein are meant to be examples of Rothman Investment Management investment approach but do not represent an entire portfolio or the performance of a Fund or Strategy and in aggregate may only represent only a small percentage of the portfolio holdings. It should not be assumed that any of the securities discussed herein were or will prove to be profitable, or that the investment recommendations or decisions made by Rothman Investment Management in the future will be profitable.  Further, nothing in this letter should be taken as financial advice.

The benchmark for US Large Capitalization stocks is the S&P 500, a market capitalization weighted index containing the 500 most widely held companies.

Past performance is not indicative of future results. Therefore, no current or prospective client should assume that future performance of any specific investment, investment strategy or product made reference to directly or indirectly in this letter or indirectly via a link to an unaffiliated third party web site, will be profitable or equal the corresponding indicated performance levels. Different types of investments involve varying degrees of risk, and there can be no assurance that any specific investment will either be suitable or profitable for a client or prospective client’s investment portfolio. Historical results for investment indices and/or categories generally may not reflect the deduction of transaction and/or custodial charges, nor the deduction of an investment management fee, the incurrence of which would have the effect of decreasing historical results.