As stocks have been falling this year, many people are talking about “buying the dip”.  Over the last decade, where almost all asset prices went up at a rapid clip, investors were trained that any decline in price is an opportunity to buy.  Rather than focusing on the opportunity set relative to a few months ago, we prefer to look at the attractiveness of an opportunity based on its price relative to a long history of pricing.  The most commonly used valuation multiple, price/earnings has dropped in half since the end of 2020, so one might conclude that stocks are trading at a 50% discount.  There is more than meets the eye, however.  First, while the multiple is half of what it was, it is only 2% below the fifty-year average.[1]  By this metric, the market is neither cheap nor expensive.  Second, the earnings denominator is looking backwards, and many companies had significant hits to earnings in 2020, due to government-enforced shutdowns.  This made the ratio look higher than it otherwise might have in late 2020.   Third, earnings have likely been flattered over the last year and a half due to pent-up demand and cheap debt.  The S&P 500 actually returned +5% over the last year and a half.  It is unlikely the perpetual future earnings of the market doubled in the last 18 months.   This is why we prefer other ratios, such as the Schiller P/E, which divides price by ten years of inflation-adjusted returns, smoothing out the effects of cycles.  It is still at a 42% premium (down from a peak 84% premium) to its fifty-year average.  This suggests that the market could lose a third of its value from here, just to get to average valuation.  We do not love the Price/Sales ratio for evaluating individual stocks, but we believe it is a good corroborating metric for evaluating the whole market, as it ignores cycles in profitability.  It is currently at a 60% premium to its 20-year median.  This makes sense – corporate profit margins are currently about 50% higher than their average.[2]  One could argue that margins should be permanently higher than history due to giant tech monopolies and more scalable businesses.  While this may be true, I prefer to line up on the side of competitive forces eventually winning out.  Other metrics, such as the Q Ratio (measuring price/replacement value), Corporate Equities/GDP, and the Crestmont P/E show major reductions from peak ratios, but put the market at still more overvalued than any other time outside of the late tech bubble.  The following chart provides good perspective: 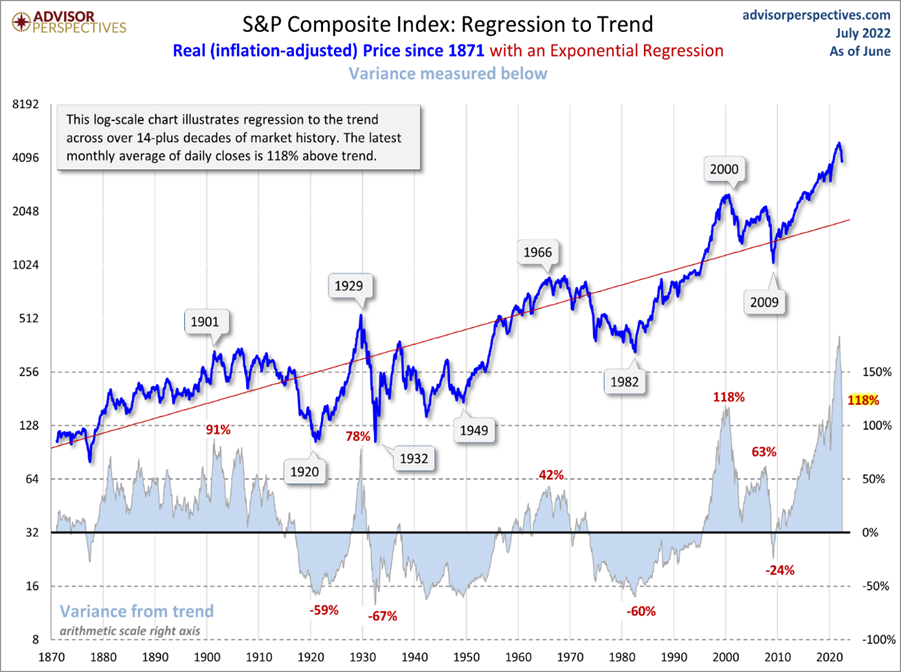 The big story is the rise in interest rates.  The ten-year rate was 0.62% two years ago, and now stands at 2.99%.  The ten-year treasury bond is generally used as the benchmark for returns.  Those making long-term investments need to be compensated for risk with a risk premium on top of the “risk-free” ten-year treasury.  Assume investors demanded 3%/year of expected return above the treasury rate for taking equity risk.  At 0.62%, investors would demand a 3.62% return, equating to paying 27.6x earnings.   At a 2.99% treasury rate, investors need 5.99%, equating to 16.7x earnings, a 39% drop in the multiple.   Not only do higher rates push asset multiples lower, they also can reduce earnings.  Big-ticket items like homes and cars that are often bought with borrowed money become much more expensive to buy.  Home equity loans to fund home improvements similarly become less attainable.  The Federal Reserve is trying to head off entrenched inflation.  Josh Ungerecht, in his excellent piece, “The Wall or the Cliff” notes that the inflation we are seeing is particularly harmful because wages aren’t keeping up.[3]  Mark Higgins notes that the conditions today are similar to those of the 1968-1982 “Great Inflation” when the misery index (unemployment plus inflation) was not far off from the Great Depression era.  Higgins calls this “an upside-down depression”, noting that it was only finally ended by inflicting serious pain on the economy through very high interest rates.[4]

The Fed has a choice now of raising rates to cause a recession (deliberately crashing the car into the wall according to Ungerecht’s analogy) or allowing out of control inflation (i.e. driving the car off a cliff).  Its only tools to combat inflation are decreasing the money supply and increasing interest rates.  Ben Hunt wrote a great article about how the Federal Reserve has artificially manipulated interest rates and money supply to break the link between wealth growth (as measured by asset value) and the economy.  These two had been tightly correlated until the mid-1990’s.   Greenspan figured out how to make people richer (on paper) than they otherwise would be, culminating in the excess of the tech bubble and its eventual crash.  His predecessors ramped up the technique using easy money to solve crises, but not withdrawing it afterwards.  They were simply pulling forward future wealth by causing the price of future cash flows to sell for more today.  Like an addict, the US economy eventually got less and less boost from the stimulus, requiring more and more just to maintain its current (artificial) level.  Finally, we got inflation with highly negative real interest rates.  Hunt concludes: “High inflation could be game over for the everything bubble.  We’ve had a couple of decades of artificially low interest rates pushing up asset prices, which has increased wealth disparity.  From here, we only have two options – massive wealth destruction to get valuations back to normal or high inflation with low productivity.  The first option would be very painful, but we’d be able to reset and start growing from a new base.  The inflation option has no way out.”[5]

I see two explanations for the decades-long variance from trend in the above chart.  First, is that the financial system has become more efficient, such that investors don’t need as high a return.  Second is Hunt’s explanation that artificially low interest rates pushed everything higher.   While there have been many efficiencies in financial markets, I do not believe investors are willing to take that much lower return than before.  Nor is the economy growing much faster.  I believe Fed manipulation is the main culprit here.  Unwinding this will likely cause a recession, and asset prices more in line with their long-term history than with the ratios of the last twenty-five years.

The economy has been strong for quite some time, other than when governments briefly shut down most businesses.  Over the last two years, trillions of dollars of fiscal and monetary stimulus have boosted the economy, both directly and through the wealth effect that comes with inflated asset prices.  We may be at the end of the stimulus-driven economic boom – the recession may have already started.  Recessions aren’t officially called until they are painfully obvious, as the official call is based on lagged data.  The stock market is a good predictor of recessions, however.  Other indicators also point to recession, or high risk of one.   The Richmond Fed tracks CFO optimism, which is at the lowest level since 2009, surpassing even March of 2020.[6]  The University of Michigan Consumer Sentiment Index is the worst it’s been in over four decades. 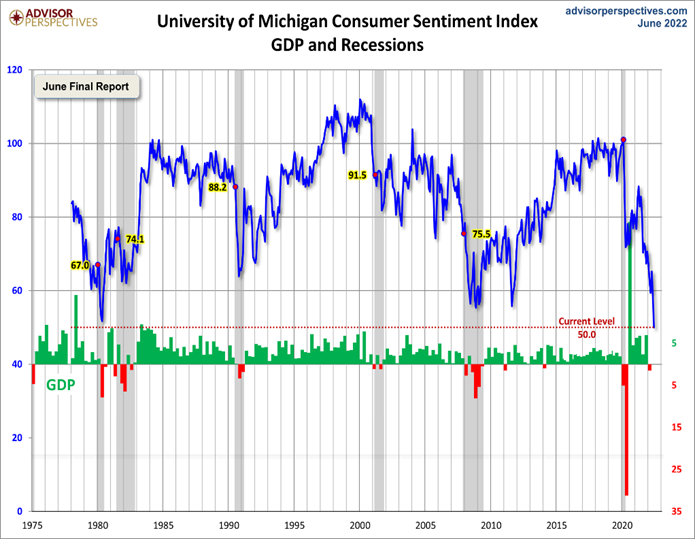 The ECRI Leading Indicators is a composite measure that predicts recessions.   The year over year indicator has fallen sharply and consistently. 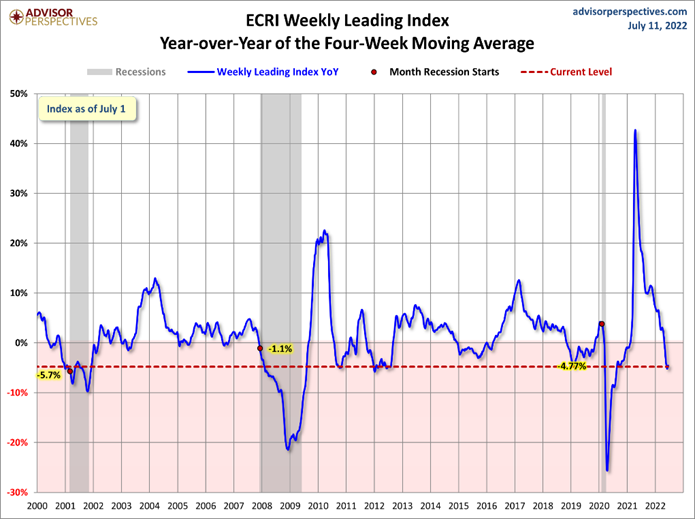 Despite all the chatter about supply chain disruptions causing inflation (which may have merit), inventories have been climbing.[7]  This indicates consumers have cut purchases, possibly due to the increased costs of food and fuel.  Rising inventories in the late stages of a recession show confidence by producers.   Rising inventory in the late stages of an expansion shows consumers faltering.  If inventories are climbing and sales are slowing, companies can cut production, which generally means cutting labor.  Further, high profit margins are threatened as discounting become necessary to move inventory.

Housing is a concern for economic growth.  Not only does the home building industry directly employ a lot of people, but home sales in general are a big economic driver as people furnish, supply and modify their new (to them) home.  Per the National Association of REALTORS®, the housing affordability index has dropped from 148.2 in May 2021 to 102.5 in May 2022.[8]  Understandably, home sales have plunged in that time.[9]  Homebuilder stocks (XHB) have fallen 29% year-to-date, much more than the S&P 500.   Wolf Richter notes that buyer interest has dried up.

The market declines so far have not been extreme, especially considering where valuation started.  As of this writing, the S&P 500 is down about 18% year-to-date, and the NASDAQ about 27%.  Highly speculative stocks, like those held by the ARK Innovation fund  have done worse – its value shed 54% so far this year.  This is how we expect things to play out – the most egregiously overvalued areas should lead the declines.  We could still have much further to go.  When the tech bubble burst, the NASDAQ lost 83% of its value – starting from a lower valuation than the most recent peak.

Conclusion: Stocks are still expensive, but momentum is clearly negative.   Arguably the biggest driver of higher asset prices – loose monetary policy - is not only ending, but shifting into reverse.  The economy appears to be weakening even as the Fed raises rates, but high inflation will keep the pressure on the Fed to keep rates higher.  As Warren Buffett famously said, “Only when the tide goes out do you discover who’s been swimming naked.”  With nearly all asset prices high and interest rates still generally much lower than inflation, this is a very challenging environment.  Investors should be careful to have a well-thought out plan, and should be very discerning in where they put their hard-earned money.  We believe that times like these are when proper allocation, thoughtful security selection and systematic risk management are most important.  We prefer high quality stocks with strong earnings and cash flow that are trading at very reasonable levels.  We are investing in equity funds with average cash flow yields of their holdings in the double digits.  This gives us some comfort that as valuation moves around, we can rely on the strong cash flows of our investments.  We are also carefully controlling risk in other asset classes, such as bonds and real estate.  We believe the era of reckless speculation has is ending and the time for diligent defense and opportunism is starting.

[2] Corporate profit margins are quite volatile.   https://www.yardeni.com/pub/sp500marginnipa.pdf has charts of margins.  This trend has been upwards since around 2000, which could be a new normal, or just an extended cycle.  I favor the latter.